I feel like I’ve had a lot to say in regards to Fox News over the last couple of years.  As an organization, I think they are unethical, overly biased, and unscrupulous.  Their ratings drivers are not journalists, they’re con artists and snake oil salesmen.  So when their message falls on deaf ears, it’s a good day for the country.  Take their most recent snafu.  They conducted a poll of their audience asking how they felt about raising taxes for wealthier Americans.  Their expectation was that the sage Reagan wisdom of Trickle Down economics would shine through, but recent challenges to that logic, by people such as Alexandra Ocasio-Cortez, using history as a lesson, wherein high percentage taxes to wealthy Americans preceded and accompanied our countries most significant economic growth, have begun to shake the faith in the conservative talking point.  Indeed, 70% of the people interviewed in the poll thought that people making over $10 million per year should pay higher taxes.  And 65% thought the same thing for people bringing in over $1 million a year.  Talking over themselves, the talking heads suggested that it’s just the result of brainwashing the idea of fairness into people.  I like to think people, when given the right information, know how to listen.

Closing on the 3 week mark for the trainwreck of a government shutdown.  And here is were we’re starting to see the seams come undone. A payperiod has passed by, and government workers are feeling the heat.  I have trouble believing that ALL of these people are prepared to make the necessary adjustments and have Trump’s back on this.  But the thing is, Trump isn’t on the path to some big victory here.  Quit the opposite.  Republican leaders are calling on Trump to let this go.  So who is this for anymore?  I’ll tell you!  Fox News!  The unofficial echo chamber of the White House!  They’re the only ones still egging Trump on with this border wall.  They’re the ones that keep goading him to stick to his guns.  Between Sean Hannity and Lou Dobbs, the Fox wall of propaganda is keeping the pressure alive, and I get the feeling that he’ll keep fighting as long as they keep pushing.  So get ready for a the long haul folks, because I don’t know that Sean Hannity even knows how to chill the hell out.

I don’t know if I’ve mentioned it before, but Tucker Carlson is hack.  He is a right wing, dog whistling, opportunistic hack who cares more about placating his cribbed viewer base than making cogent points or saying things with any kind of value.  He repackages bargain basement talking points that high school debate students use when throwing mock cases together.  He provides no value in terms of discourse, and more than that, he knows it.  He’s been told to his face by better men than me that he sucks (Jon Stewart…where are you? We need you…).  Anyway, recently one of his bigoted dog whistle diatribes where he suggested that helping poor people was bad for the bottom line, which lead him to suggest that immigrants make America “dirtier”, caused some of his sponsors to FINALLY take notice that he’s a scumbag.  As of this writing, 4 of his sponsors dropped him, and it looks like he might lose more in short order.  This of course caused him to give a non-apology where he unconvincingly said that he did indeed like immigrants and immigration.  As it turns out, that didn’t help his situation.  Do I expect this to collapse his career?  Unfortunately, no, but it is nice to see that unlike Sean Hannity or Donald Trump, some bad people know that this level of humiliation is supposed to be a bad thing.  But make no mistake, the only thing making America dirtier are people like Tucker Carlson.

Watching Trump lie is an interesting thing.  Because he’s not good at it.  Especially when it comes to things that where he has to come at it from multiple angles.  If you want a good example of it, look no further than his most recent interview with Fox News (or as S.E. Cupp called in on a CNN, his “infomercial”).  Watching him explain why he’s not responsible for the commission of crimes gets almost uncomfortable as he can’t seem to find an avenue to lie that doesn’t force him to almost immediately backtrack and try to move forward.  He starts off by trying to claim that he’s not involved with the tabloid that paid off Karen McDougal, but if he was, he didn’t know or didn’t authorize it.  But then even if that isn’t the case, what happened wasn’t a campaign finance violation.  But if it was a campaign finance violation, than it was Michael Cohen’s fault, not his.   But even if it is his fault, why is it a big deal, because Obama did it.  But if you don’t believe ANY of that (which you obviously shouldn’t, because literally not a word of it is true), then it’s all fine anyway because all (read: very few) campaign finance lawyers agree that he didn’t do anything wrong.  It remarkable to watch in the moment, him caveating each lie with another, trying to hedge his bets, but the problem then becomes that each subsequent lie weakens the previous one, making the whole shebang a weird incoherent mess.  At a certain point, Trump might just want to invoke his right to remain silent…

A few things I need to get out of the way.  CNN isn’t fake news.  But for that matter, Fox News isn’t either.  Don’t get me wrong.  Fox News is heavily slanted, and some of it’s “journalists”  (Tucker Carlson, Sean Hannity, Jeanine Pirro, Laura Ingraham, etc.) manipulate facts and data to support unrealistic conclusions, but it’s not “fake” news.  Both networks have actual journalists, and (usually) report on the important stories of the day.  But both networks have their slant.  Fox News’ is arguably steeper, going extremely conservative, while CNN can boast a bit more balance, and is better about retracting false or misleading stories.  But they both DO report the actual news (mostly).  So how are they capable of covering the exact same story and drawing the exact opposite conclusion? It’s ludicrous and can be totally infuriating.  I like to think that I’m a moderate that leans left.  It’s an admittedly pretty dramatic lean, but I don’t think my political views don’t stray too far away from the center.  And as such I want to find as many perspectives on the news as I can find.  But when I hear CNN and Fox News explain to me the exact same story with drastically different outcomes, I realize why it’s so easy for Trump to lie about the media and get away with it.

So, on November 5, Monday night, right before the most contentious midterms in modern history, Sean Hannity was brought up by Donald Trump to speak and endorse his political allies.  Is that surprising?  No.  Not even kind of.  Sean Hannity is a scumbag who doesn’t care one whit about professionalism in his career, unless he thinks someone else is being unprofessional.  But still, people rightly had complaints about the optics of a journalist, who even as an editorialist, was stumping for Republicans.  Using his platform as a person who is supposed to be outside that bubble, to endorse politicians is the worst kind of behavior.  So again, not surprising, still gross and unprofessional on a profound level.  Even Fox News found his political endorsements and verbal backstabbing of fellow reporters to be distasteful, and put out a statement suggesting that they were going to take some kind of action to which I say “HA!”  Sean Hannity isn’t going to get so much as a wrist slap.  He is the highest rated cable news show in the country.  As gross as that sounds, the fact is that he’s the draw for many people to that network.  Which is discouraging to think about, but true none the less.  Sean Hannity is immune from basically any kind of action.  He could drop kick a baby on the air, and Fox News would suggest that it isn’t up to the standards of their Network, and then wipe their hands of it.

Two days before his summit with Vladimir Putin in Helsinki, Trump declared that the mainstream media would fake news the heck out of his meeting.  He assured everyone that he would not be treated fairly.  It was a good thing you could get the real, fair and balanced word on the situation from Fox News.  If you wanted the real inside dope on Helsinki, Fox News wouldn’t steer you wrong.  So what did Fox News have to say regarding Trump’s meeting?  Abby Huntsman, one of the hosts of Fox and Friends, Trump’s favorite show, said that he was “throwing his own people under the bus”. Brian Kilmeade, another host of the show said his rhetoric was “ridiculous”.  In fact, all across the network, Fox News was breaking ranks to voice their dissent, that is until you get to Prime Time editorial shows.  Sean Hannity was sure to try and spin this the best way he could, by bringing Trump on to clarify the things he said, but even Hannity could hide his obvious discomfort at some of the things Trump was saying that night.  Trump may have tried to backtrack on his positions the next day, but you can’t stuff that monster back in it’s box. 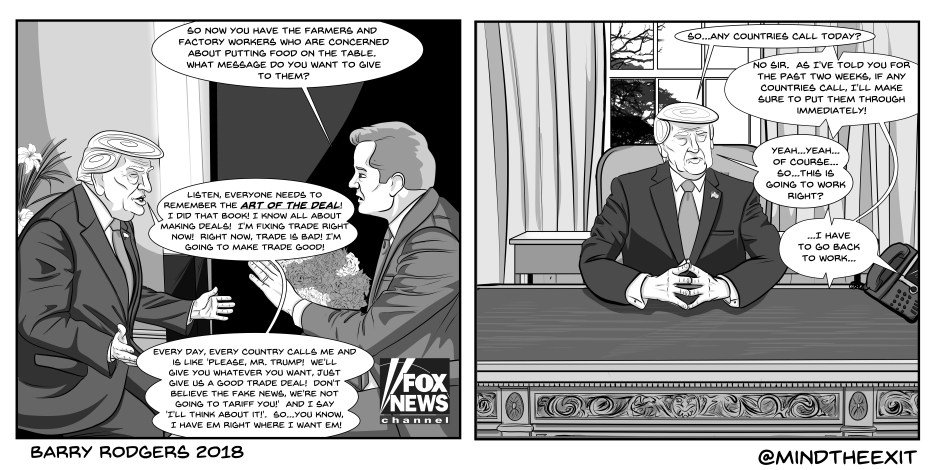 Donald Trump wants us all to know that he DEFINITELY has the upper hand in this whole trade mess. I mean, well respected economists say Trump’s trade policies harken back to policies undertaken in the 80s, namely with Japan, that grew the trade deficit by like 500% in 10 years, but Trump is totally confident, so we all should be too, right?  When he says that every country is every day calling him to deal on trade, we can take that at face value, right?  Though it has been pointed out that back in the 80s, when we were playing a similar game with Japan, and things got worse, that Japan largely played ball, unlike say China and Canada, who are definitely not, imposing large tariffs of their own.  LISTEN! Clearly everything is under control!  I mean, what reason can we possibly have to think that Donald Trump, master deal maker, doesn’t know what he’s doing?

Hello! Welcome to Mind the Exit. Please follow me on Facebook and Twitter. If you have suggestions for constructive feedback, I'm always happy to hear it.
Become a Patron!